No products in the cart.
Start Shopping Return Policy

An argument for Solar on your rooftop – Part I

Take a typical home in Hyderabad or Coimbatore or for that matter most cities and towns in India. The uncertainty surrounding power cuts and the need to tide over them has spawned a whole industry around Inverters and Batteries & everyone seems to have one in their home for power back up. Yet the use of Inverters has perversely increased the demand for electricity – leading to more black outs and at an individual level increase in electricity bills. The round trip efficiencies of the Inverter and batteries are so poor that for every two units of energy that is put-in, one gets barely 1 unit of useful energy. Effectively the consumer is paying double for the unit of energy used during blackout hours. Even if one is willing to pay more for the convenience of always-on availability of power, the power cuts are so long that batteries just do not have sufficient time to recharge. A typical lead acid battery takes more than 10 hours to recharge completely under ideal charge rates. Most Inverters in the market are undersized relative to the size of the batteries and would take longer to recharge the batteries. 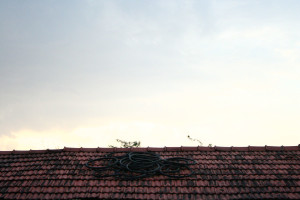 With REhub – stands for Renewable Energy hub – one can now add Solar to existing Inverters, effectively upgrading to Solar without having to invest in a completely new system again. Amberroot’s Solar chargers efficiently extract power from the Solar photovoltaic panels (Solar PV) and keep the batteries charged.

Care must be taken to size the Solar panels: install too little and Solar becomes nothing more than a token and worse can end up increasing the electricity bills, install too much and extractable energy is wasted because there are not enough loads or storage to utilize the energy that can be generated. Ideally, Solar installation must match the day time energy requirement in the absence of option of grid export. In battery based storage systems an additional factor comes into play. When Solar is added it becomes the second charger to the existing set up and depending on the AH (Ampere hour – the storage capacity of the batteries) the combined charge rate of both the Solar PV and Inverter can exceed the ideal charge rate to the batteries. If charged at a rate (speed of charging – higher current put into the batteries in a shorter time would mean higher charge rate) higher than what is ideal, the batteries end up getting ‘surface charged’ with diminished capacity to hold charge and eventually shortening the expected life of the batteries.

This is where REhub makes a big difference. By virtue of monitoring the currents going in and out of the batteries and dynamically adjusting charge rate (output of REhub to the batteries), REhub is the only device that adds Solar in way to maximize the extraction of Solar without exceeding the recommended charge rate to the batteries. Power cuts do not mean compromises anymore. Switching on the extra fan or light in the daytime or watching a Soap in the afternoon need not lead to an anxiety on the availability of power in case of further power cuts in the late evenings or night time. Adding Solar enhances the convenience that was promised by the addition of the inverter – at a cost that is lower month on month both to the consumer and to the environment.

What about cities and places where blackouts are not common ?

The next post in this series will cover that.

Long cable between Solar pump drive and the motor

The Payment interface is now up and running! We are ready to take orders directly through our buy page . You can now order Solar MPPT chargers and accessories direct from Amberroot !! Dismiss