No products in the cart.
Start Shopping Return Policy

In my earlier post (https://amberroot.com/an-argument-for-solar-on-your-rooftop-13/) I discussed how in the places where power cuts are common, Solar makes immediate sense and how REhub makes it even more easier to decide on Solar. What about places where Power cuts are not so common but the electricity tariffs are high ? 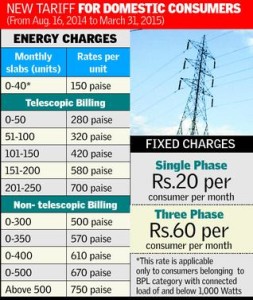 Take the state of Kerala . Kerala has power tariff slab that not only increases with the number of units consumed per month but also penalizes the customers exceeding a certain number of units consumed. Once the units exceed a limit, the consumers are charged the higher rate for all units consumed and not just for the extra units. Let us say that 334 units were consumed in a given month. On exceeding 250 units consumed, the charge is Rs 5 for all the units I.e for 334 units and not for the extra 84 units beyond 250. In a normal telescopic rate based tariff, the consumer would have paid Rs 1696/- versus as per the non telescopic tariffs he would have to pay Rs. 1904/- . Imagine the benefit if Solar PV helps in reducing the units so that the total falls into a lower slab. 22 + states increased the electricity tariffs last year and we are headed to a situation where the cost of electricity from Solar is already lesser than alternatives – what experts call Grid parity. As more and more states allow net metering or reverse metering, the case for Solar becomes even more stronger. In the case of net metering (or reverse metering) the Grid becomes the storage and the consumer is paid for the amount of units put into the Grid. In this scenario, the constraints are not the storage or the day time load in a house. The constraint is now shifted to the amount of shade free roof top available and the money available for investment. And I will show in a future post how much of a good investment that is with Karnataka and Tamilnadu’s reverse metering policy for small rooftops. For now, let us stick to adding Solar to existing back up and go into the mechanics of the addition in some detail. That’s in the next post of the series.

Image from The Hindu article on power tariff revision in Kerala – link here.

The Payment interface is now up and running! We are ready to take orders directly through our buy page . You can now order Solar MPPT chargers and accessories direct from Amberroot !! Dismiss